The Sound of Music

The holiday season is jam-packed full of Christmas fables and spirited plays…and The Sound of Music. Not your typical fa la la la la production, but a classic nonetheless. 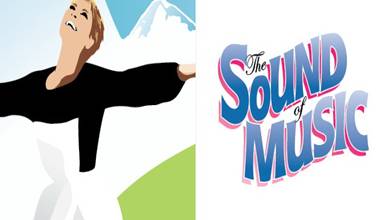 The Sound of Music first hit the Broadway stage in 1959. Loosely based on Maria von Trapp’s memoir (The Story of the Trapp Family Singers), the piece owes its music and lyrics to Richard Rodgers and Oscar Hammerstein II respectively. In 1965, the play was adapted for the big screen as a film musical starring Julie Andrews and Christopher Plummer, which won five Academy Awards.

We’ve all grown up with the timeless numbers My Favorite Things, Do-Re-Mi, and Sixteen Going on Seventeen. But to see it live on stage is something else.

This past Friday I was fortunate to attend Gateway Theatre’s opening night of The Sound of Music. This was my first time at the venue, and despite bad Google map directions, I made it in time with fifteen minutes to spare.

I’m interested to see the performance. I wonder what it is like to work with such a well-known piece. Directed by Christopher McGregor, I’m curious how much of the original is taken into consideration when creating Gateway’s version. Must you emulate it scene for scene or make it your own through space and tone without deviating from the story? The conductor raises his baton and I wait to see how the performance will unfold.

Alison MacDonald (as Maria) is wonderful. I’m a little taken aback by how much she looks like Jo Frost of ABC’s SuperNanny. And her voice is a perfect match to Belle of Disney’s Beauty and the Beast. In the first few scenes, she seems to be slightly emotionally disconnected from the lyrics; however, by act II, MacDonald’s talent has fully blossomed. Perhaps a hint of opening night nerves? In fact, the musical as a whole comes to fruition after the intermission, when the performers take full reign of their characters.

Ian Butler (Captain von Trapp) throws me off at first. He looks quite a bit like Daddy Warbucks of Annie. But like the play itself, Butler is at his prime in the last few scenes of the musical. It is here we see his power, his conviction, his Captain von Trapp come to life. While Allan Zinyk (Max Detweiler)—the comic of the night—lightens the air with his quick wit and effortless rebuttal. And might I add, I love his beautifully tailored double-breasted suit.

The von Trapp children are delightful, with eye-catching performances by Ranae Miller (Liesl), Michael Wilkinson (Friedrich) and Taylor Dianne Robinson (Gretl). Little Gretl, my goodness, if not the cutest thing you’ll ever see. What a voice and promising talent.

And of course, Colleen Winton (Mother Abbess). Her song is hypnotic and powerful, and commands attention.

The set is well designed given the limited space and number of scenes. I would have preferred the curtains drawn for set changes but attribute the switching of props in clear sight to stage size and the flow of the performance.

The orchestra is marvelous, as are all the numbers. Maria and So Long, Farewell bring a smile to my face. The power of music to transport and transform is beautiful. How it floods your mind with memories and even, visuals of the film. Breathtaking. However, there were times the orchestra drowned out the performers. In fact, throughout the night the mics were a little on the off side. Some players were louder than others, and on several occasions, the mics would come in half way through the first word. I leave this to opening night mishaps.

I find myself comparing the piece to the film which does the production a disservice. While casting is key, the look of a character is irrelevant so long as the actor can deliver true emotion and connection. In this light, Gateway Theatre is successful in adding theatrical comedy and a playfulness to a family classic.

A charming performance for the musical lover in you!

The Sound of Music is playing at the Gateway Theatre in Richmond until December 31, 2011. For tickets and more information, visit: www.gatewaytheatre.com.