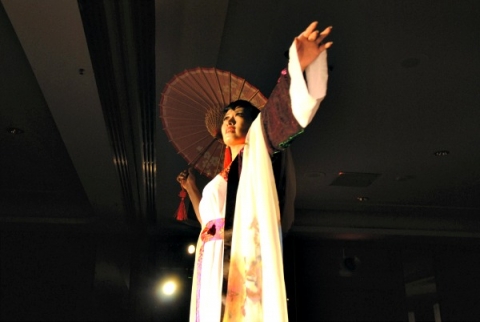 International is supposed to be a key word here. Unfortunately, the festival lacked diversity with the prevalence Japanese and Chinese national clothing. It catches the eye right at the entrance, where ladies dressed in kimono greet the guests. By the end of the show I counted around 60 models, including young kids, who walked the catwalk in Japanese and Chinese national costumes comparing to maximum of 20 models wearing European style of clothes. The Vancouver International Fashion Festival was held at the Pacific Gateway Hotel, which is located in Richmond.

Attempting to add diversity to the show, people of different backgrounds and races were dressed in costumes, but only in traditional clothing of two countries, which was a complete deal breaker for me to call the event “international”. Though the outfits looked spectacular, I find it deceiving to call the event an International Fashion Festival. I did see a little diversity, but not much of a fashion, and especially not much of a festival.

One performance that was intended to make a smooth transition from one part of the show to another also left a couple of questions. The young singer named Ava Frye, did a good job singing, but did not fit into the show atmosphere. Fashion festival is intended to be a part of a high-culture leisure activity, where the attending public is sophisticated and somehow related to the industry: fashion designers, magazine editors, models, photographers. The pop singing-dancing performance, featuring two young unprofessional dancers and Ava herself left these people wondering what was it that they just witnessed. The transition was too fast and too energetic, followed by the complete change of rhythm to the kind of melodies that play in spa salons. You could hear the whispers circulating around the crowd that they were not ready to jump from a calm state of being to a loud, fast, energetic performance, followed immediately by the melodies that were likely to put them to sleep.

A few professional models performed at the show, and I’d like to say they did a good job. Most of them are in some way related to the attendees, either being their relatives or friends. That gave a show this friendly vibe that would be unwise not to acknowledge in this review. I cannot help but find some of the features of collectivistic cultures appealing, as demonstrated by the friendliness of the primarily Eastern European and Asian demographic.

Treating this event as a bonding gathering rather than a high-cultural event seems more right to me, but maybe next year with a little improvement it can become one.