CJSF volunteer Jay Peachy attended Push Festival's White Cabin, a multi media work full of fury, complexity and mystery. Jay was able to find a satisfying narrative through White Cabin's narrative puzzle, this is what he had to say....

To start things off I’m not much of an experienced performance art’s fan.  However as a friend once referenced to a Stanley Kubrick quote; "I don't know what I want, but I know what I don't want.” 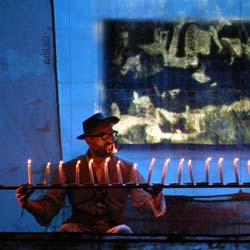 White Cabin is a multimedia work that treats audience members to non-sequential sequences of dream-like impressions. The play drew on its influences from the Russian silent film tradition as well as shadow and object theatre characteristics. White Cabin was filled with absurd, inspired, bizarre and often touching events, it is part dream, part chaos and part a variety show of fantastic images.  White Cabin was performed at Granville Island’s performance Works a perfect venue for this production as it provided a great intimate setting.

I found myself striving to grasp the narrative of White Cabin. Perhaps there was one at first, however the visual stimulation of the performance seemed to get me off track and my senses were taken aback.  There was too much going on, at one point I stopped trying to over analyze the performance and I just let go and accepted what was coming at me.  It was much better this way, it gave my mind a break and let me fully experience the spectacle before my eyes. In the distant background, the smell of herbal cigarettes wafted in the air, invoking all of my senses and emotions. I felt as if I was running through a carnival hall of mirrors at an incredibly high speed, adrenaline pumping, my mind twisting and interpreting images and objects in a variety of ways. Through this, I also felt the tactility through the production’s use of liquids, fire, newspaper and human flesh.  White Cabin provided an evening of entertainment, comedic relief and a sensory journey, I’d would definitely do it again.