What is this strange name? What does it mean? What is Penelopiad?

Well, let's start from the beginning. It all started approximately in the 8th century BCE with a great Greek epic poet Homer, who is credited being the author of The Iliad, and later The Odyssey. The first tells a story of the Trojan War, famously to have been sparked by the abduction of the beautiful Helen. The secondfollows Odysseus through 20 years of sea voyages and adventures, which the hero undertook after the end of the Trojan War. Closer to our times, in 2005, Margaret Atwood wrote The Penelopiad, which was later adapted into a play and which is now presented by the Arts Club Theater Company, until November 20, in Vancouver. 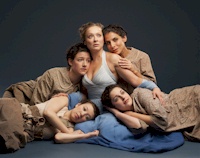 The Penelopiad tells a story of Penelope, a faithful and prudent wife of Odysseus. Throughout centuries, and again by Atwood,sheis presented as an exemplary wife, who waited 20 years for her adventurous husband.  Penelope never lost hope of Odysseus' return, neither tooka lover, nor gave in to the suitor's pressures to remarry. Atwood also presents the account of the lives of the twelve faithful maids of Penelope, who supposedly helped herin the witty schemes against the suitors.

The play starts with Penelope, now in the Greek underworld, going over her memories. She is watched by the ghosts of her maids, who later also have memories of their own to share. Here, the set and light design needs a special mention of praise. An imaginative decoration consisting of a large number of suspended, tied up ropes of varying length, combined with cold bluish light, does not fail to send shivers down your back, as well as to prepare you for the tragic events to follow.

From here, we are taken through a serious of flashbacks to the determining moments in Penelope's life: her birth, her unfulfilled love for her father, her unsatisfied craving for her mother, her growing up in the shadow of her cousin Helen's beauty, her first meeting with Odysseus, their marriage, their first 9 months of life in Ithaca before Odysseus' sea voyages. The scenes change themselves in rapid progression, forming and dissolving like waves. Moments of striking sadness are washed awayby moments of promising joy, and vice versa. Yet, Penelope's craving for human warmth never seems to find its consummation, not with her parents, neither with her husband, nor with her own child.

Throughout the play, Penelope's stories are completedand enhanced by those of hermaids. They tell us about their tragic childhood, parents, and relationships. It seems that the only difference between the life of the mistress and that of her servants is in the amount of manual labor. In this way the audience is left with the impression that all women, privileged and unprivileged alike, had a miserable existence in the times of Ancient Greece.

A curiosity about the play lies in the fact that the story of Penelope and her maids is told exclusively by a female troupe. What I found more interesting later is the fact that even behind the scenes, out of the total of 19 people in the production team, only 2 were male. Why is it that there are no male actors?After all, many important participants in the story were male:Penelope's father, Odysseus' father, Odysseus himself, his son Telemachus, the suitors, etc. Some of the scenes between Penelope and Odysseus, as well as those between Penelope and her maids, were set in very intimate settings. A spark of homoeroticism, perhaps, has something to do with this?

In any case, female or not, this cast did a mediocre job. While the main characters of Penelope, Odysseus, Odysseus' nanny, Telemachus, and Helen played exceptionally well, their work was diluted by the acting of less talented remaining maids. Maybe the fact that those remaining actresses were musicians and singers explains their lack of acting, or maybe not. Still, the fact that this imbalance of acting skill seriously undermined the whole production, remains clear.

Overall, I find the praiseworthy goal of Atwood's original novel weakened by skewed directing of Vanessa Porteous. Representing underprivileged and traditionally unrepresented voices in human society and history is one thing. However,charging this representation with radical feminist critique is another. The play would have brought out more compassion and more collaboration on the part of the audience, both female and male, if it was more representative of the first (female) and more sensible to the second (male). In order to really discuss a number of serious and important issues raised by The Penelopiadone would wish for a more inclusive, respectful, and celebrating diversity platform for communication.