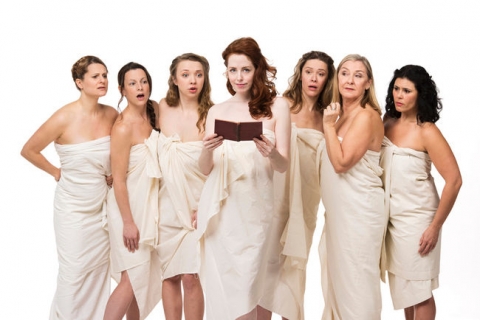 In the world premier of the musical Miss Shakespeare, The Escape Artists take to the stage at Granville Island’s Performance Works giving a solid performance that takes us back to the Elizabethan period. With script and lyrics by Tracey Power and music co-written with Steve Charles, Miss Shakespeare tells the tale of a time when women players went unseen and one woman—a playwright in the making—made inroads to bringing women to the stage and to changing history forever.

In realizing that “women didn’t just suddenly appear on stage one day […and that] there had to be a projection over time,” Power asked the important questions: When did women first perform on a public stage? Where did they rehearse? Who could they trust with their desire to be players? Once these questions were asked and mulled over, Power envisioned a female playwright—who developed her skills underground—and who better than the daughter of the Bard himself, Judith Shakespeare.

With direction and dramaturgy by James MacDonald and a cast of seven actors (in real time) who would become six players and a narrator et al. (in Elizabethan time), the trajectory of the play is delightful to watch as we imagine what it must have been like for women to plan how and where they could rehearse, what they would say, how they would say it, and how they could get away with performing on a public stage without their cover being blown. The combination of Power’s clever lyrics and the musical collaboration and direction of Steve Charles, bring hilarity to such pieces as "Keep Your Pecker in Your Pants” as it pokes fun at the ludicrousness of men playing women and having to deal with the issue of concealing their penis while women players playing men are concerned that their make-do pecker (in the form of a rolled up hanky) may fall out mid performance and reveal the true nature of their gender. Humor aside, the various musical pieces—ranging from themes of following your dreams to a grieving mother’s dream of what her still-born children might have been—illustrates the depth of the lives of the women players who have gone underground to find their voice.

Throughout the play, we see Judith’s evolution as a woman who struggles with being a player and playwright who must push past her society’s views that it is obscene for a woman to take to the stage. A nice touch is the recurring scenario where Judith, seemingly haunted by her father (a voice in her head), engages in a dialogue with him. Despite the ghost of Shakespeare present (or because of it) Judith attempts to write "something no one would ever believe was created by a woman." In doing so, the audience gets a taste of how hard it must have been for women of that period to become players in Shakespeare’s time.

An exquisite piece of writing, an inspiring work of art, Power has created a play that unites Shakespeare with his daughter, Judith, on a twenty-first century stage. William Shakespeare got it right when he said the play is the thing but who knew that Tracey Power would be the playwright who would set the stage for Judith, for Miss Shakespeare’s debut. Nicely done.

To listen to radio interview with Tracey Power (The Arts Edge, CJSF 90.1 fm)