God and the Indian 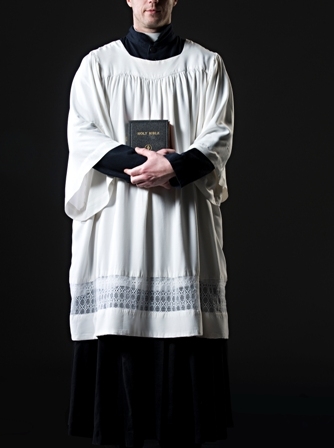 Where there is a will for reconciliation there is a way. And where there is an opportunity to speak the truth there is Drew Hayden Taylor. As an Ojibwa playwright, and an advocate for his people, Taylor speaks up about the injustices forged against the First Nations Peoples of Canada, in the theatrical production of God and the Indian, recently remounted at Vancouver’s Firehall Arts Centre.

Set in the office of Anglican Assistant Bishop George King, played by Toronto-based actor Thomas Hauff, the play opens with King reflecting on his promotion and the party that just ended, in his honor. Like a kid on his birthday, King is happily opening his gifts when to his surprise a Cree woman appears at his door. The woman who goes by the name Johnny Indian, played by Lisa C. Ravensbergen, insists that she knows him. In thinking she is a confused panhandler King tries to send her away and even attempts to call the police when she refuses to leave but is swayed when the woman says she recognizes him from her childhood days at the Anglican residential school.

From this point onward, the play centers around their conversation which leads to Johnny’s accusation of King sexually molesting her as a child and King’s denial of these allegations and his subsequent efforts to convince her it was another priest, who he even identifies by name. While Johnny holds strong to her convictions King offers her gifts, alcohol and money in hopes of appeasing her but as expected, Johnny Indian refuses stating that she wants nothing from him, nothing except an admission of abuse and an apology. She never gets it.

Although the play is powerful, and Ravensbergen’s performance is riveting, the repetitive dialogue between the two actors—“You did it.” “No I didn’t.” “Yes you did.” And so on.—threatens to weaken the play’s resolve. Sometimes the audience doesn’t know who to believe. At the same time, the dialogue reminds us that such allegations can be hard to prove, especially after we add years, drugs, alcoholism, and mental illness to the mix. It is this very thinking that King uses as his defense; on the other hand however, it is remarkable that someone who has undergone the challenges that Johnny Indian has, can come back to the same conclusion every time. Perhaps it is this conviction that will be most believable.

Directed by Renae Morriseau, Ravensburgen gives a stellar performance such that her portrayal of Johnny Indian—as a survivor of sexual abuse and the residential school—comes to life on stage. The effect is not only that we believe the actor, but that we believe the woman and realize that the life she’d had taken from her is what led to alcoholism, depression, and the streets. Similarly, Hauff’s character is equally as strong. While at first glance we may think he is not, it soon becomes apparent that his character’s dishpan demeanor—comprised of noncommittal characteristics such as denial and indifference—is the very thing that allows people to look the other way, convincing themselves that things aren’t so bad or that, even if they are, nothing they do will make a difference. While one hand strikes and the other turns away, both are guilty, as one cannot carry on without the other.

Despite my thoughts on guilt, the play leaves me with many questions. Why did Taylor choose to leave things hanging? Was King guilty of sexually abusing Johnny Indian? Was Johnny Indian too strung out on drugs, alcohol, or memory lapse to get the facts right? Would an admission or apology from King have changed things for Johnny Indian? Would an apology be enough? And, is there any true resolve?

Like any of us who are looking for the truth, we can only go with what we know, what we witness, and what our intuition tells us. Perhaps Taylor’s intention— from the get go—was to write a play in which the audience would be left to decide for themselves what the truth is. Perhaps it’s all any of us ever really have.