Like the performance, here’s my review in fast forward.

Imagine watching all 37 William Shakespeare plays in 97 minutes. Now make your way to Metro Theatre and you’ll see just that. The Complete Works of William Shakespeare (Abridged) is a three-man show, whereby you are taken on a sped-up journey through the literary works of Mr. W.S.—from comedies, to tragedies and histories in between. 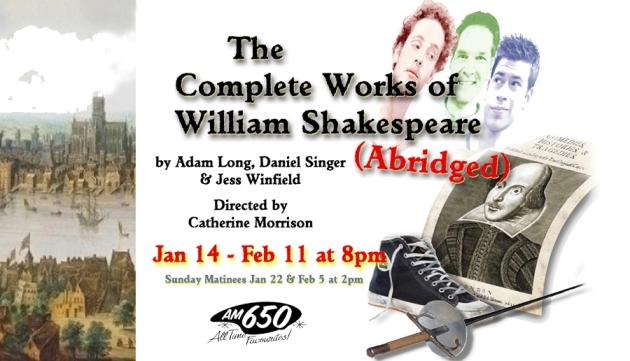 Acted out by our trio, Braedon Cox, Adrien Gendron and Robert Sterling—the performance was brilliant. Peppered with pop culture references of today, we travel through the parodied life and times of our famed playwright in a rather unique way. Here we see all 16 of Shakespeare’s comedies in one scene, his histories re-enacted through sport, Titus Andronicus as a cooking show, Othello as a white man’s rap (I could have gone without this to be honest), and MacBeth in a bastardized Scottish drawl. Add a pinch of this and splash of that, not to mention classics Romeo and Juliet and Hamlet in true Shakespearean prose, and you have the complete works in about an hour and a half.

Cox, Gendron and Sterling did wonders at presenting the material in an informative but palatable way—using the plays as a backdrop to their chemistry on stage.

Direction was on point. The writing was well timed, with strong rebuttals. Costume changes, hilarious. The performers as a unit and on their own, two thumbs up. And Hamlet in less than a minute, and in reverse, too funny. Bound to get better with every performance.

If you want a good laugh, go see this show.