The Thirteenth Chair  is a whodunit murder mystery. Written by American playwright Bayard Veiller in 1916, it marveled audiences on Broadway and hit the big screen in 1919, 1929 and again in 1937. Today, it is being repackaged by director Sarah Rodgers.

This is my first Studio 58 experience. One could say I’m a little weary of school productions. Blame it on the sometimes less than amazing acting, or poorly designed concepts…but I’ve seen my fair share of bad plays. Tonight, I’m not entirely pessimistic. I walk into the theatre and I am instantly taken by its charm. It’s small but intimate. I like the set design. The art deco stenciling pops, and while the stage is relatively tiny, it’s inviting. No negatives yet. 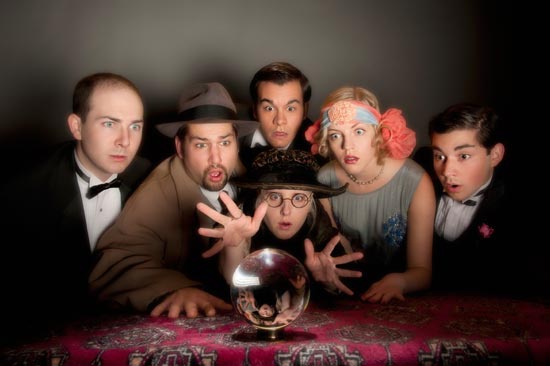 A pianist is set off in the corner and plays tunes from the 1920s. I’m smitten. I look around the room and see a sea of grandparents, or may it be, older theatre-goers. Regardless, the place is packed. Nice treat for the performers, as well as the spectators.

A little back story on the play… It’s the spring of 1929 and the Crosbys are hosting a party to celebrate their son’s engagement to Helen O’Neill. Among the posh guests is Madame Rosalie La Grange, a sharp-shooting not-so-fancy medium, invited to lighten the mood with a séance. With the windows closed and the doors locked, all thirteen pull up a chair, sit in a round, and firmly hold hands. Quaint enough. Lights are dimmed, spirits are summoned, questions are asked but when the darkness fades, there are only twelve. One of them has been murdered. Now, whodunit?

The set design was just what was needed, with the balcony melding effortlessly into the living room. No bells or whistles, as the small space couldn’t afford much more. But clearly reminiscent of the era, and without being overdone. As for the costumes, the red sequin overcoat worn by Mary Eastwood (Lindsay Winch) was spectacular. Otherwise, it was the usual suspects: flapper dresses, baggy pants, two-toned shoes. Although, all well tailored. The musical accompaniment (piano played by Matt Grinke) throughout was simply lovely, and added to the overall humour of the piece.

In terms of the acting… Well I have a few actors I liked, others, not so much. In my mind, Inspector Donohue (Kazz Leskard) stole the show. His physical comedy was refreshing, and added a touch of mockery to the murder mystery. He was also the most engaging, in terms of performing with his fellow actors. Stephanie Moroz (Helen O’Neill) captured the naivety of the character. Beyond that, she was more doe-eyed than not. I don’t think this is so much to do with acting than the role itself. Roscoe Crosby (Ryan McDonald) held his own. He was convincing and commanding without taking the limelight from the more humourous leads.

As for Joel Ballard (Edward Wales), I found his acting, well, over acting. He seemed as if he were speaking to instead of connecting with. More laboured than it should have been. However, his role as the between-scenes entertainer was flawless. A musical theatre calling? Perhaps. Whatever it may be, Ballard was a wallflower when sharing the stage but a star when solo. Sara Brown (Mrs. Crosby), on the other hand, ran through her lines so quickly that her delivery was neither natural nor easy to watch. Nerves? Could be. Regardless, there needed to be a more realistic pacing of speech and response time, and less regurgitating of lines.

What I’m not so hot about is the original scriptwriting. How could it be that X kills Y and no one takes notice, when X is seated so far away from Y? Hugely unrealistic and no fault of Studio 58, but Veiller’s lack of detail. I would have liked to see a how I did it scene too. A little Clue-esque.

All in all, I liked the play. The dance choreography at the end of the show was very cute, for lack of a better word. It brought lightness to what was an already funny and clever play. The ensemble was strong, minus a few stranglers, but the direction was on point, the comedy, well delivered, and overall, a perfect piece for a theatre program.