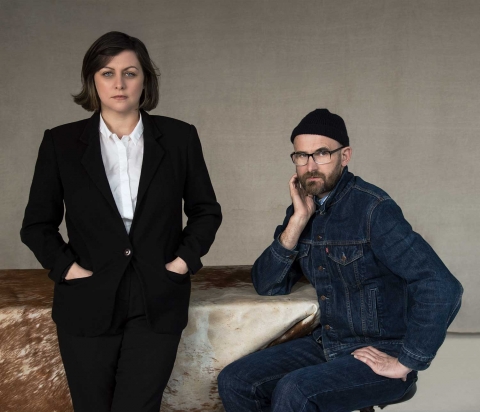 Tracyanne and Danny, a collaborative project between Tracyanne Campbell (Camera Obscura), and Danny Coughlan (Crybaby) visited the Biltmore Cabaret during their tour on February 1st.

The Biltmore Cabaret was filled with red and blue lights and my favourite thing, mirror balls, hanging on the ceiling, which inspired me want to sip alcohol while sway to the bands playing. It was my first time going to the Biltmore, so I was curious and a tad nervous. However, as I stepped into the hall, the popcorn smell welcomed, I felt relaxed and cozy. It was neither too big nor too small, just the right sized-place for listening and interacting with the artists and the music closely. One of the opening bands, Vancouver-based musician Jody Glenhem, was already performing even before the starting time. I really appreciated it that there was live music playing when I arrived. With the red cranberry highball in one hand, I was ready to absorb the music.

Jody’s sound was complex and dynamic; at times very powerful like a lion, at the same time it is sorrowful. The red lights haning over her while she played provided a perfect marriage with her music. I regret that there were not many people still at the end of her songs. After Jody, came the Photo Ops from L.A. Their music was from the air and water, nature with acoustic sound. I thought of the blue sky and sunshine over the beach when I was listening to their music, fluid like clear water.

After those two opening bands played, Tracyanne and Danny appeared on the stage. People started to gather on the floor to greet and welcome the band, who had travelled all the way from the UK, and gave round of applause as soon as the band said “Hi” with the lovely accent. Their song “The Honeymooners” stood out most to me, complete with woh-hoos that reminded me of a train’s whistle. “Jacqueline”, another noteworthy song from their set, featured only Danny, with his voice longing for someone.I became empathic with it because I usually react sadder, more solemn songs like that.

Overall, their music reminds me of going somewhere. I thought of driving on the road, with the trees all along, or riding a bicycle in a Stanley Park under the sun. Between the songs, they talked a little bit about the episodes and background of the songs, which helped warm up the intimate atmosphere of the evening. While I was initially sitting, somehow the gestures and movements of the audience, as well as the interactions between the band and the crowd made me  jump into the crowd. So for the last few songs, I tried to get as close as I could to feel the heat within the little space. People were moving their body on the floor, not dance but more of groove. I moved my body too, like others and finally really felt like I belonged.

Tracyanne’s bluntness was charming the crowd throughout her banter, saying “Shut up band” when the music played while she was tried to talk with the audience. All in all, it was without bleep. It was a felicitous mix of tender and rough, their music and talking.

At This Time of Day
What you will hear:
Vinyl meets electronic; electronica on vinyl.