No Cameras Allowed: My Career as an Outlaw Rock and Roll Photographer 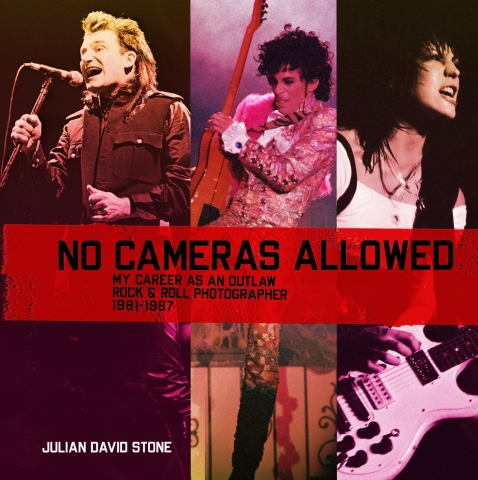 Way back, when the mullet was KING, teenaged photographer Julian David Stone was documenting the 1980’s Rock scene, by sneaking his camera into concerts across his native California. While the rest of us were trying to scrape up enough money for a cold, frothy beer or an overpriced concert “T”, Stone (whether he realized it or not) was capturing a great era of Rock. All this comes to light with the recently released coffee table book, No Cameras Allowed: My Career As An Outlaw Rock & Roll Photographer 1981-1987. Stone really wanted to be a Rock Star, but with no musical talent to speak of, he turned to his love of photography as the next best thing.

The genesis of his budding career began the night he attempted to bring his camera into a Ramones gig. Stone elaborated:

"'No cameras allowed.' Imagine my surprise when a large security guard, after searching my bag, blocked me from entering the club where the Ramones were about to take stage. With a deep scowl, he flatly intoned those three heart-breaking words. Minutes later, back at my car, as I was about to toss my 35mm equipment on to the back seat, I froze. Was it the Ramones? Was it being eighteen? Was it that streak of rebellion that we all want to believe we have? Perhaps it was all three — because I decided I was going to photograph the concert anyway. I strolled back to the security guard, who remembered me and looked me over from side to side. Seeing no camera bag, he gave me a quick pat down, found nothing, and let me in. I hurried to the bathroom, where I quickly pulled a lens from one sock and the camera body from the other. I retrieved some rolls of film hidden in my crotch and quickly put everything together. Then, just as the Ramones hit the stage, I slipped out of the bathroom and began to shoot. And shoot I did. From that moment on, I was hooked."

Over the next several years Stone fine-tuned his camera concealment, taping equipment all over his body and ultimately customizing a special jacket designed to hide the equipment from unsuspecting security guards and bouncers. Stone was exhilarated by creating his own form of Rock n’ Roll Rebellion. He amassed over ten thousand rock photos, 250 of which are displayed in this excellent book. Cover to cover there are over 40 different bands featured, a who's who of 1980’s Rock royalty – U2, The Police, Prince, The Cars, Cheap Trick, Duran Duran, REM, The Ramones, The Tubes and the list goes on.

Stone’s all-time favourite shot was a picture of Prince in all his glory (with his purple boa flowing) in 1985 at the LA Forum during the legendary Purple Rain Tour. During this show his rather large telephoto lens was smuggled in his female friend’s purse, underneath a sizeable can of Aqua Net hairspray – not an uncommon product in the big hair era of the 1980’s.

After a Bruce Springsteen show, Stone decided to hang it up and his collection of photos sat for 30 plus years, until now. Thumbing through this glossy, limited edition book has rendered me somewhat nostalgic, as I drop the needle on some recently purchased vinyl. Almost makes me want to Rock that glorious mullet just one more time, but then again, maybe not.

No Cameras Allowed is a great look back at an era that’s long gone, and at the end of the day, “It’s Only Rock ‘n Roll –photography- But I Like It.”