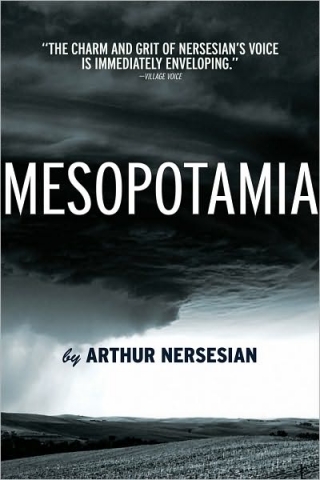 How many dead Elvises does it take to make one good story? Mesopotamia by Arthur Nersesian Reviewed by Gerilee McBride is available through Akashic Books, 2010 for $15.95 USD

How many dead Elvises does it take to make one good story? Apparently more than the two in Mesopotamia, the latest novel from Arthur Nersesian. I tried to like this book, I really did. It promised a protagonist of comedic proportions (born in Korea and raised in a Southern Jewish household), a small town in Tennessee (with plenty of wacky Southern characters), the killing of Elvis impersonators who were due to perform in the annual Sing-the-King festival and the mysterious disappearance of a young white woman who may or may not have been killed by her older black husband the story of which has become major tabloid fodder. Unfortunately, there’s just too much high-larity and high-jinx for one story to handle and with Elvis tossed in as a ringer, there’s not much left over for solid character development or plot lines that don’t involve one too many amazing coincidences.

New Yorker Cassandra (otherwise known as Sandy) Bloomgarten is a freelance reporter relegated to tabloid journalism since spiraling into full-blown alcoholism as a result of several miscarriages and a failing marriage. She somehow lands a freelance assignment for a tabloid called the Rocket covering the story of the missing teenage bride Missy Scrubbs in Memphis, Tennessee. En route she visits her hometown of Mesopotamia for a rather unsuccessful reunion with her mother before drunken drive stumbling on to the story of the two dead Elvis impersonators.

Sandy’s character is all surface and parody –in one scene she’s almost raped but it’s just a minor detail because this is offbeat comedy at it’s best yo, as portrayed in another scene where a redneck tipster mistakes her for Connie Chung – cue the laugh track – and trades a potential story lead in return for Polaroid’s of her tits to sell to his friends. Don’t worry that Sandy might have to make Sophie’s choice here because thanks to her friend and fellow alcoholic journalist Gustavo Benoit who just happened to have arrived in town with a trunk full of clown costuming and props also, luckily, has a fake boob chest plate that Sandy is able to deftly strap on and fool the fool with. Well played sir, well played.

Our intrepid Sandy may be down but she’s not yet down and out. Oh yes, wait, she is both down and out because while on the road she learns that her apartment in New York is being condemned due to shoddy building practices and so she is homeless on top of everything else. Poor Sandy! Everything bad does seem to happen to her doesn’t it? Don’t let’s give up yet though because the Elvis story that Sandy has run to ground (literally) might just be worth a buck or two and she has plans to turn her fortune around with the help of Vinetta Loyd the wife of one Floyd Loyd, one of the misfortunate Elvi to have gone to his grave before show time. By the time we reach the end of the book everything is wrapped up with a neat little bow as if to say, “See, wishes do come true and unicorns really do exist”. Well, I’m not made a believer and I despair of unicorns so I’m afraid Mesopotamia will be relegated to that little used box in the basement where yearbooks and Brownie badges go to die, along with my hope that this book would have redeemed itself by it’s ending paragraph.