The Man Who Lived With a Giant 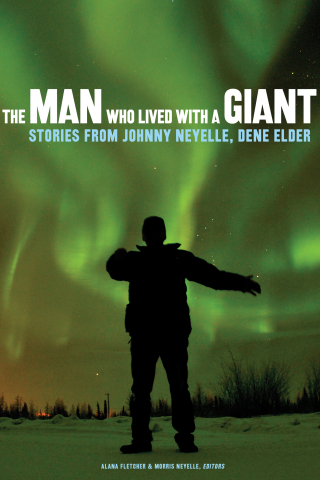 It used to be tradition — entire communities coming together and learning from the stories that boasted centuries in age, sometimes millennia. However, upon coming to a time of travel, technological growth, globalization, and colonialization, more and more indigenous youth are leaving their communities to take part in this modern culture. This poses a problem for the elders of the communities; who will listen to the stories most vital to their history?

Dene elder Jonny Neyelle has attempted to fix this problem by compiling the most important stories he knows into a book. The Man Who Lived with a Giant tells stories of origin and creation, of a time when man and beast lived in peace, and a time when they could no longer. He writes about how a medicine man taught a baby eagle to catch fish, and reasoned that that is why eagles catch fish today. He writes of shapeshifting medicine men who ventured into the afterlife to find their wives, brothers, and sisters, to bring them back after they were taken by the evil spirits. Neyelle writes of wars between various tribes and warriors, with territories stretching all the way to the Arctic Circle in the Yukon. He writes of the threat of cannibals and how some took it upon themselves to rid the world of the cannibals, to make the world peaceful and safe for all. Neyelle recognizes the value of details and key points, which he demonstrates by making the stories short, yet valuable and entertaining.

The stories are fruitful with lessons that are seldom taught to children today. In “Yamorehya, the One Who Walked the World,” the author tells a story of a man with powers who took off into the world to make peace between all humans and creatures alike. He brought this peace by hunting down the wrongdoers of the lands; the cannibals and the evil shapeshifters, as well as those who controlled the dinosaurs and all other terrifying beasts. This wasn’t a simple task, requiring courage and commitment to his cause. Yamorehya demonstrated patience and dedication, traits that are so easily left behind today.

The stories also blossom with entertainment. “The Man Who Lived with a Giant” is a story of another man who once met a giant, and took up residence with him. They hunted and ate and lodged together. Most importantly though, they protected one another, until one day the giant became badly wounded. The story dictates fighting and sacrifice and emotions from all characters who play a part in it.

I eagerly read on, waiting to learn what will happen next, and being captivated by every line. It’s not every day that you have the honour of enjoying the stories belonging to First Nations that have been passed on from elders to their communities for centuries. Dene elder Jonny Neyelle’s grants you this marvellous opportunity with a compilation of stories in The Man Who Lived with a Giant.