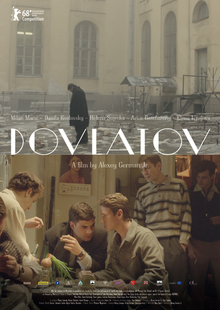 Now is the autumn of our discontent. It is 1971, seven years into the reign of Leonid Brezhnev, and the thaw of the 60's has once again crystallized into stagnation. In the days leading up to the annual October Revolution celebrations in the USSR, Sergei Dovlatov (Milan Marić) is lost: between surreal dreams and even more surreal reality. Dovlatov takes place within a single week in November, and chronicles a fine seven days in the life of Sergei —Seryozha to his friends and family— before he became one of the most popular counterculture writers of the 20th century. Sergei does normal things; hang out with his writer friends (amongst them the future Nobel Prize laureate Joseph Brodsky), attend jazz shows, argue with his ex-wife, and tries to find a German doll for his daughter Katya (Eva Herr). Sergei can't get published; perpetually rejected by the Union of Soviet Writers for his subversive style, he runs around writing uninspired articles for a factory-based newspaper. Sergei tries to have a mundane week; it is thwarted by one death, one suicide attempt, and one eminent emigration. Early in the movie, he interviews a cast of worker-actors who are dressed as Russian literary icons, and introduces himself as Franz Kafka: this more or less sets the tone of the film, which portrays a Kafkaesque, absurdist bureaucratic fever dream with an underlying institutional antisemitism.

The elements of Dovlatov that makes the film compelling are also the ones that endangers it, if it were to be done to excess. The long, wandering camera, the defocused sound design, the intricately blocked out sets, and the general pallor, at their best captures the banal horror of everyday Soviet paranoia. At points though, this delves into something that resembles caustic dispassion; it is a bit jarring to watch the cast of characters act as if they have been specifically instructed not to convey the full spectrum of human emotion. The film heads towards a conclusion and claws at certain themes, but rarely in a way that is fully realized; Aleksey German teases at ideas and suspends them in the air, but leaves them before they reach fruition. For example, the deeply intertwined themes of migration, repression, and Soviet antisemitism —coalescing in the refusenik movement of the 60's and onward—: Dovlatov (who is of Armenian and Jewish origin) at one point flatly muses to a friend that his lack of success as a writer is because he is Jewish, and then immediately drops the subject. More telling, most of the contemporary writers and artists that get either namedropped or actually personified in the movie are Soviet Jews: Mandelstam, Solzhenitsyn, Brodsky (Artur Beschastny), and artist Shlomo Schwartz (Igor Mityushkin), to name a few. Perhaps German had thought this so apparent that it would be redundant to address explicitly, and this is something left lost in translation.

To convey a dissident writer relatively unknown to a foreign audience is the question of verisimilitude. Dovlatov does a great job at some of this: we are induced to believe in the subtle paranoia, and the thriving counterculture that exists in spite of it. Marić portrays Dovlatov with a sardonic wit and charisma, and we are again induced to believe that he is a sharp, sometimes-womanizing, counterculture writer. But I am unconvinced that film manages to convey Dovlatov as Dovlatov, one of the most acclaimed and widely read Russian writers of the 20th century: even though this is very much Sergei avant Dovlatov, there is little indication of his genius. It is also curious that for a film about state repression and counterculture, it is produced by Channel One Russia, a Kremlin backed, pro-Putin news channel that has caused multiple controversies for allegedly distorting information. In this light, how should we view one of the more brow-raising scenes in the movie, where an 'urologist’ not-so-subtly propositions Dovlatov and pitches a partnership to write a Greek epic together? Considering that the Russian government (as well as some supra-national forces) already puts insurmountable effort in associating LGBT people with predation and deviance, this makes an already edgy and tense scene feel all the more suspect. With a film that spends so much screen time discussing editing, suppression, and censorship, it would prove prudent, I think, to pay more attention to these artful omissions and additions.

IntraVenus
What you will hear:
Women & Gender Radio

Music and talk about all things all gender from a feminist lens.

Last week of month features Best of the WWest podcast