The VIFF program describes “ELENA” as a “highly unsettling thriller” but it’s not a thriller in the conventional sense.

This film is a darkly lyrical comment, both philosophical and ruthless, on the lengths a woman would go to help her own flesh-and-blood, even when she knows her son is a good-for-nothing lazy oaf, who is unemployed and keeps impregnating his wife and breeding a pack of good-for-nothings like himself. Therein lies the irony and the humanity in this subtlely intense film. 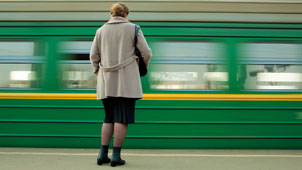 Like an onion this film starts slowly unraveling the layers of the complex relationship of a seemingly ordinary well-off older couple who live alone in a posh apartment in an affluent neighborhood. What could possibly happen?

The film opens with a super long first shot from a tree outside the apartment windows looking in and seeing nothing; the windows are large, reflective glass, and yet….chilly and oppressive. A somber grey and blue palette of an autumn morning floods the screen. The first shot is both curious and unsettling, as we’re not used to the first scene starting so slowly and held for so long. The music by Philip Glass throughout the film brings to light the hidden tensions and nuances of relationships. The silences are also deployed dramatically and meaningfully.

With the sharp ring of an alarm clock, the scene transitions to a woman, Elena (the female lead played by Nadezhda Markina) who is just waking up in her single bed facing the door. Her husband sleeps in the master bedroom adjacent. How odd. She wakes up slowly, goes to brush her luxuriant hair – and the scene is a slow one so the audience is conned into thinking this is another ordinary day. The routine of ordinary domestic rituals such as drawing the curtains, cooking oatmeal, combing one’s hair, are given their weight as tensions build layer upon layer slowly and we realize not all is well in this empty-nest household.

The husband (played by Soviet Russian actor Andrey Smirnov) is filthy rich, a bit of a womanizer, and enjoys the best of what money can buy, and yet is utterly ungenerous with his second wife’s son by a previous marriage. We discover their main discord is the wife is adamant about supporting her no-good son but the husband wants nothing to do with him. He, on the other hand, dotes on his own very spoiled and rebellious daughter also from a previous marriage. Elena was his father’s nurse before he married her. A marriage of convenience? Not sure. Elena says she loves him.

The drama ensues when after a lot of humiliation and heartache from a husband she loves, Elena is told by him (after he has a heartattack) that he will redraw his will to give everything to his daughter and leave her only with a generous annuity to live on. The wheels are now in motion for the thriller that will make Elena a rich woman and we, the audience, tense in our seats wondering if she will get away with it.

For me none of the characters in this dysfunctional family deserve our sympathy (not the skinflint husband, the various no-good children), except for the title character, Elena, who takes drastic measures to ensure her son and family will have a comfortable life. Markina’s performance is top-notch with all the heartache, subtlety and bravura of the type of performance this character demands. The husband is played deftly by Smirnov who reveals his odd moments of tenderness; very effectively done: his is a character no one in the audience would shed a tear for.

Mikhail Krichman’s cinematography is expressive and alluring. The grey and blue tones of the film act as a riveting expression of the darkness within each of us and the reality brought to light when we are driven to extremes. Production designers Vasiliy Gritskov, and Valeriy Zhukov have also done a stunning job creating an ambiance that is stark, dark, and ULTRA chic.

This film is a graceful, glacial and tense mystery that will keep you on the edge and thinking long after the film is over and the Philip Glass score reverberates into dead silence.