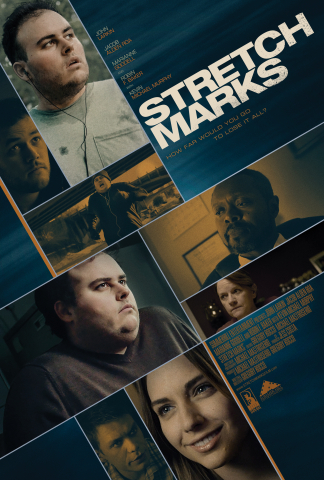 When I was a little girl, I didn’t have a perception of what bodily changes are. I was a skinny, energetic kid who couldn’t care less. One time at summer camp, I heard someone saying they had stretch marks, so naturally, I asked my mom what it meant. She said that stretch marks appear when you grow up too fast and your skin can’t keep up. While it isn’t very far from the truth, it still isn’t completely accurate, biologically speaking. Still, the sentence stuck with me throughout the years. Stretch marks equal growth.

Lyle Bennett, the lead character of Gregory Rocco's 2018 film Stretch Marks, is grieving after the death of his father. He copes by constant eating, which leads to his inevitable weight gain. He is being pestered by his gym-rat brother James and a well-meaning, but grief-stricken mother.

Lyle works at an advertising agency where he is a top-notch photo retoucher. He spends his days making other people look perfect while his own self-image remains low. As days go by, Lyle’s excessive eating habit remains his guard against the unfairness and cruelty of the world around him: an attractive co-worker Alessa who is nice to him, but hardly sees Lyle as a romantic interest; brother James who keeps pushing Lyle to lose weight so that he doesn’t end up like his father; and his tone-deaf friend Keith, who pressures Lyle into going out and being inevitably rejected by every girl he asks out.

The life of Lyle as we see it is from his perspective. We hardly know who the people around him are and their thoughts. We perceive the world as cruel, full of enemies ready to attack, reject and hurt at any time. So we keep eating.
The movie leads us on with symbolism as Lyle tries to lose weight. He is obsessed with reaching his ideal weight: 203 pounds. Whenever he can’t sleep at night, he looks at the clock, and the time is always 2:03 am.

The only way to understand Lyle’s feelings and not completely get lost perceiving him solely as a mistreated, overweight man is to listen to brief conversations Lyle and his easily-giving-up-smoking-therapist have: “is it just a facade, Lyle?” - which proves to be the answer we wanted, and the bitter truth Lyle has to face.

His eating habit is a facade of a hurt, insecure man. Once Lyle understands that, we see things in a different light: his brother James, who sincerely cares for him, his mother who loves him unconditionally, and himself, a man who proved that this time, stretch marks meant growth.

Amplified Radio
What you will hear:
Electronic Dance Music

4am - The Downliners Crypt - Surf & Garage Rock
6am - Classical Guitar Alive - Classical Repetoire
7am - Outlaw Jamboree - Country Music
9am - Gorilla Radio - Social Justice
10am - Speak Up! - We've Got Something to...