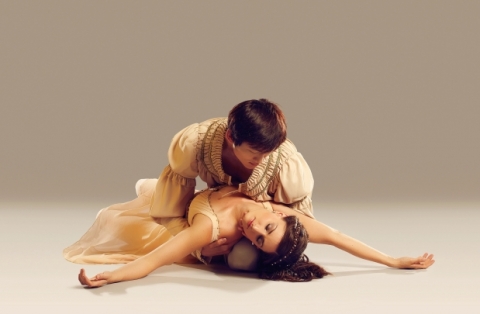 The audiences at the January 30th performance of the Royal Winnipeg Ballet's Romeo & Juliet, choreographed by Rudi van Dantzig with orchestration of score composed by Sergei Prokofiev, were treated to a polished, exciting, and lush evening of classical ballet at its finest.

In addition to the technically polished and enchanting dancing on stage by the principal dancers Amanda Green (Juliet), Liang Xing (Romeo), Dmitri Dovgoselets (Mercutio) and Egor Zdor (Tybalt), the other prominent shining light of the evening was the luscious, dramatic and brilliant score by Prokofiev. The orchestration was superb and expressed the intricate emotions of the characters and their emotionally-intense predicaments with sensitive, magnificent virtuosity.

The technicality of principal dancer Amanda Green's Juliet with her initial gaiety, even impishness, transformed by fate into a tragic lover, is a delight to witness and heart-wrenchingly expressive. Her chemistry with her Romeo is solid but one feels it is forced at times, as displayed by his abrupt movements especially in the lifts. These could be softened for more romantic effect.

The mise-en-scene of the production with its strong dazzling light (especially the scenes in the square) replicated the warm Italian sun, reminiscent of the light of painter Thomas Couture's "Romans During the Decadence" (1847). The chorus scenes of Veronese street life and ensemble dancing, thanks to designers Nicholas Cernovitch and Toer van Schayk, were perfectly artfully brought to life and the bravura swordfighting performances demonstrating the danger and death in the midst of life fully palpable and vibrantly alive.

A refreshing modernist touch to this ballet is the use of the return of the dead Mercutio and Tybalt in Act III, as symbolic specters of death (dressed in black capes) ever-looming in Juliet's consciousness, which resonated with me and cast the spell of imminent doom on the lovers.

The ballet executed a strong start, but a too-prolonged Act III, that at times felt stretched out with an abrupt ending. Culminating with the dual suicide of the lovers at the Tomb of the Capulets, I wish it could have instead been extended somewhat due to its high emotionality, deserving of more slow-paced tenderness and more time to fully express it. Overall this Royal Winnipeg Ballet's production of Romeo & Juliet is a high point in our ballet season.

WINGS
What you will hear:
Women's News

Bringing eyes and ears to women's issues in Canada and beyond, the Women's International News Gathering Service is an all-woman independent radio production company that produces and distributes news and current affairs programs by and about women around the world. wings@wings.org