For three nights (February 16-18), Vancouver was lucky to host National Ballet of Cuba's performance of Don Quixote after the original by Marius Petipa (version of Alexander Gorsky). 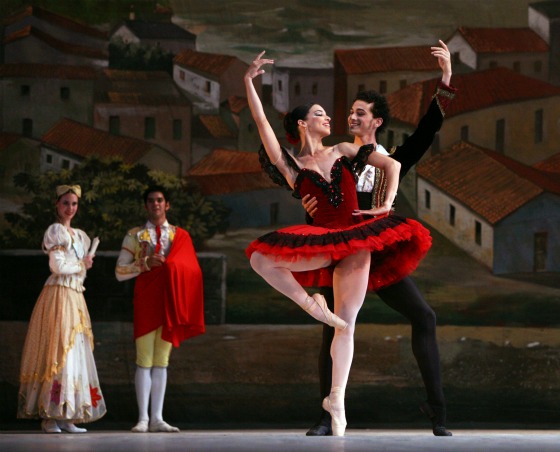 As the name indicates, Don Quixote is inspired by an episode of the famous novel "Don Quixote de la Mancha" by Miguel Cervantes published in 1605 (Part I) and 1615 (Part II). The novel deals with the adventures of a somewhat insane self-proclaimed knight Don Quixote and his loyal servant Sancho Panza.

The performance of Don Quixote by National Ballet of Cuba was simply beautiful. At certain moments one would feel so much amazement, that one would forget to breath. Don Quixote impressed with its touching love story, skillfully performed, with the kind of dance deliverance that one is lucky to witness little these days.

The ballet performance Don Quixote revolves around a certain incident involving two lovers who are forbidden to wed. Kitri, a daughter of a local innkeeper Lorenzo, is kept away from her sweetheart Basilio, only a poor barber. With the arrival of Camacho, a rich nobleman from another town who came to ask for Kitri's hand in marriage, the unfortunate lovers are faced with even greater challenge. While Kitri gives her definite refusal to the nobleman, believing in marriage only for love, Lorenzo, her father, invites Camacho to discuss the details of the marriage in his inn.

After several scenes and the introduction of additional characters, Don Quixote and Sancho Panza arrive in town. As you may remember [if you have read the novel], Don Quixote is in love with Dulcinea, an idealized and completely out of touch with reality version of a certain farmer's daughter.

Dulcinea serves is Don Quixote's ladylove, inspiration, and motivation for chivalrous undertakings. Being delirious and mad, Don Quixote mistakes Kitri for his beloved Dulcinea. Promising to serve her for all eternity, in a key moment when Lorenzo comes back with Camacho to declare his daughter's engagement, Don Quixote arranges for the lovers to flee, an act for which he is later severely punished by Camacho's soldiers.

First, the level of dancing was very high. The pointe work was impressive, but the precision and mastery of some of the very complex and highly sophisticated acrobatic movements were truly astonishing. In fact, the audience did not stop itself from interrupting with applause in the middle of the music to express their satisfaction.

Second, the scenery and costumes were well chosen in a classical Spanish style with red, cream, and black predominating. The elegant movements of dancers were well complemented by soft and flowing fabric of their costumes. The artfully decorated stage framed and presented the dancers in all of their grandeur.

Finally, the choreography of Don Quixote presented an exceedingly good execution of the original version by Gorsky performed for the first time in 1869 at the Bolshoi Theater in Moscow. The National Ballet of Cuba absolutely deserves praise for all of its high quality work.