The Winter holiday season brings a few versions of this famous classical story by Peter Tchaikovsky. The Goh Ballet presented their interpretation at the Centre in Vancouver for the Performing Arts between December 15 and 18. 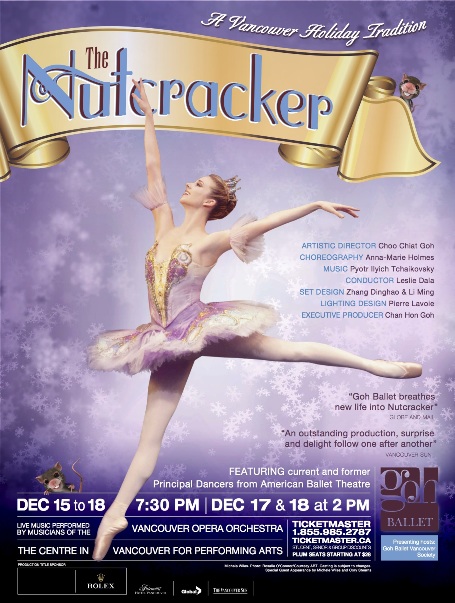 What is it that makes this ballet so popular? Well, first of all, it's the story itself. The Nutcracker is equally enchanting to both children and adults. The adventures of little Clara in the kingdom of gallant officers, gorgeous fairies, playful dolls, colorful toys, blooming flowers, gentle snowflakes, and exotic guests from far away countries has something special to offer to any spectator with any level of imagination.

Second, it is the magnificent music that has made this ballet a classic. The Nutcracker became a tradition in many countries around the world, due to the universal and unifying power of Tchaikovsky's score. Romantic, gentle yet passionate, so human and therefore so touching, at times very humble and at others grandiose, the Nutcracker is beautiful, memorable, and unforgettable.

Then there is the wonderful dance itself.  Gentle, soft, elegant, and plastic movements of ballet dancers across the stage, the synchronization and symmetry aided by non-tiring repetition, all contribute to the enchantment and hypnosis-like state of the viewer.

Overall, Goh Ballet's version of the Nutcracker was visually stunning. However, this effect was unfortunately not so much due to the choreography as to the diamonds of its artistic director and official sponsor, as well as to the masterfully crafted costumes of the performers.

The direction and the timely progression of the scenes were managed well. Big crowds of performers did not seem to distort the scene. In the beginning of the story at a Christmas Party in Clara's house, the simple and elegant movements of people across the stage were much more eye-pleasing than some of the later complex and technically-demanding choreography.

The use of performers of all ages and technical abilities, was a noble and, one could say, "democratic" undertaking, no doubt challenging at the organizational levels. At some points the youngest performers playing little mice did not fail to put smiles across people's faces and acted as a sort of comic relief in the overall tragedy of bad choreography.

Why was choreography so bad? No, it was not the fact that the technical skill was varied due to variability in ages and abilities. I think, a play for kids and adults during a Winter Holiday Season, does not demand impeccable execution. What really put the performance down in my eyes (and in the eyes of many people who understand the intricate interrelationship between music and dance) was the partial (not total) lack of interplay between the dance and the music.

At some points of the performance, the choreographer of Goh Ballet managed to interpret some dances with fantasy and in accordance with the delicate elements of the music. An example of this would be "Valse des Fleurs", "Russian Dance" and "Chinese Dance". However, in the most important scenes of the whole performance, with dances by the Nutcracker himself, the exotic "Spanish Dance" and "Arabian Dance" (that by the way looked more like a yoga performance), as well as the duet of the Sugar Plum Fairy and the Cavalier Prince, the ballet's choreographer completely missed the point.

What was especially disappointing is latter performance, in the official description somewhat pretentiously called "Grand Pas de Deux". The supposedly stars of the performance Cory Stearns and Michele Wiles, marketed as "principal dancers from American Ballet Theater" turned the most awaited scene into a mini-disaster, and I say mini, because thankfully the children were not affected (by this realization). Mainly this seemed to be caused by the extremely rigid and "Don't-touch-me, I-am-in-pain" kind of dancing of Michele Wiles.